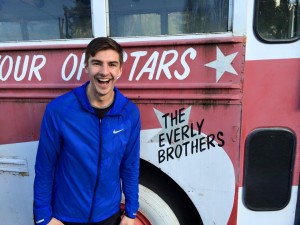 David, like many seniors “walking” in a few weeks, finds frightening the open nature of his possible next steps.  Graduate school?  Ministry? A writing career?  Then, too, there’s the matter of “vocation” more generally considered:  how to live a meaningful life while not on the job.

The English major, David says, developed his worldview and broadened it. He now sees the world through lenses provided by authors, and the result has been greater “sympathy, compassion, and understanding” for people, real or imagined.  David isn’t sure he would have gained such emotional capacity in a major like, say, history or political science.

One of the best parts of the major?  Getting to know the profs.  David feels his professors have affirmed his “gifts, skills, and talents.”  Their knowledge base has meant the world to his intellectual growth and moral understanding.  Access to his profs is one of the characteristics David has valued about the English Department and SPU generally.

SPU has also offered David opportunities to connect his major to ministries, using his volunteer work to help people tell their stories.  He especially loves courses that “interconnect” and the way campus culture invites students from various majors to relate their learning to each other’s.  “It’s easy to become an insular English major,” David says, “but SPU makes possible, through its liberal arts curriculum, lots of other classes” and thereby helped him become “a broad-minded, generous person.”

Any departing advice to newbie English majors?  Balance methodologies courses like The Sentence and Creative Nonfiction with lit courses, says David.  Take the lit-survey courses early.  And take a career class, like the one the career center offers that helps English majors translate what they’re doing in classes into marketable skills.  “Reading, making claims, working with people,” David says, are the things the major has given him to take out into the world.

You are currently reading Senior Profile: David Dovgopolyy at English.